U of Montana Griz Basketball 2016 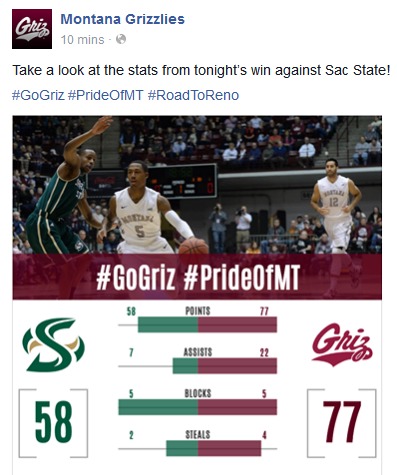 The University of Montana Griz Basketball teams, both mens and womens, attracts a lot of fans.  Did you know that both the mens and womens head basketball coaches were also Grizzlies basketball players?  In Big Sky Country, they play to win the Big Sky Conference.

As a point guard for Montana from 1992-94 DeCuire was named All-Big Sky Conference as a junior and senior. He set a school record in just three seasons with 435 career assists. He also established UM’s single-season mark with 199 assists as a senior in 1993-94, when he was ranked 12th in the nation, averaging 7.1 assists a game.

He was the recipient of the Grizzlies’ Carl Dragstedt Award (MVP) as a junior (he shared it with forward Matt Kempfert that season) and senior, and received the John Eaheart Award (Outstanding Defensive Player) following his senior year.

Last year, Head Ladies Basketball Coach Robin Selvig, won Big Sky Conference Coach of the Year.  A graduate of University of Montana in 1974, Coach Selvig has been coaching the Lady Griz basketball team for the last 37 years and has coached over 845 winning games!

The 2014-2015 Lady Griz Basketball won the Big Sky Conference with 14 wins and only 4 losses.   They made it to the 2015 NCAA Women’s Basketball Championship, but lost to Notre Dame in Notre Dame, Indiana.

The 2015-16 season is Robin Selvig’s 38th year as coach of the Lady Griz and his 43rd year at Montana as either a player or coach at his alma mater. He enters the season with a record of 845-275, an average of more than 22 wins per year.

The Assistant Coaches are also graduates of the University of Montana:

Blue Mountain Bed and Breakfast in Missoula welcomes guests to stay at our luxurious and scenic mountain retreat.  Overlooking the Bitterroot River and enjoying gorgeous mountain vistas, our guests love coming to stay with us.

While we are located in a quiet setting, we are also just a fifteen-minute car ride from the University of Montana campus in Missoula.  Guests can enjoy watching our Montana Griz basketball games during their stay with us.